Even if you have yet to play BioShock Infinite, you’ve probably heard that it takes place in “an idyllic, cartoonishly racist Disneyland” called Columbia, and that it involves alternate realities. The folks at Irrational Games have had the admirable, mischievous audacity to set a game in 1912 and fill it with the period’s least savory aspects (ask me about Columbia’s phrenology museum sometime) as well the expected funny hats and barbershop quartets. When it engages with American history, this game makes me feel like the world’s nerdiest kid in the world’s bleakest candy store—but when it engages with phenomenology and determinism, not so much. 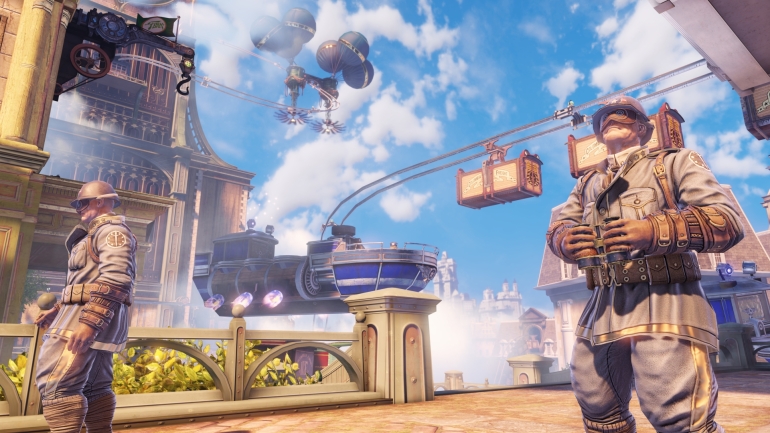 Look, I know, the story’s historical and metaphysical strands are both about rebuilding the past in our own image, and realizing that there are more things in Heaven and Earth, Elizabeth, than are dreamt of in our philosophy. And yes, quantum mechanics were as much a part of 1912 as eugenics and phrenology, so it’s all nice and period. And whenever Rosalind and Robert Lutece were talking, I could just about convince myself that Columbia was a richer place for having had its reality frayed and contorted.

But BioShock Infinite isn’t about Columbia. That’s key, and it’s frustrating. In light of what turns out to be the game’s central premise, Columbia is just a single roll of the dice God is playing, a payout from the narrative slot machine of inventive historical fiction. However vivid it might be, it exists purely and simply to be vivid, not to argue a political point of view.

This time around, the matinees who write Family Guy pitched 1912, the sky, American Exceptionalism rather than 1960, the ocean, Objectivism. Next time it could be 1820, a vast system of tunnels inside a volcano, missionaries in Hawaii. Whatever provides the most engaging backdrop against which to shotgun a procession of crow-harried psychotics, let’s go with that.

When people say that BioShock Infinite is too violent, I don’t think they’re reacting to the arresting severity of the game’s violence so much as the incongruous scale of it. It makes all the thematic sense in the world for Booker to be a strikebreaker, a thug, a mercenary, and even a dehumanized instrument of the-only-good-Indian’s-a-dead-Indian Jacksonian genocide.

But it makes no sense for Booker to be a one man army, plowing through wave after wave of policemen and cultists and revolutionaries (not to mention ghosts and robots) singlehandedly, like they’re nothing. The game’s individual acts of violence—from the thing with the baseball, to the thing the skyhook and the guy’s face, to the Baroque forms of medicialized torture employed by Comstock’s cossacks—reflect the rampant totalitarianism and horrific technological ingenuity that characterized the preeminent wartime atrocities of the 20th Century. But that loses its sting in a haze of buoyant, endlessly repeated, thematically vacant candy apple arterial spurts.

By portraying so much ugly history in such loving detail, BioShock Infinite seems to say please remember that this happened; it’s worth remembering. But Elizabeth’s ultimate solution—and this is my one observation here that might qualify as a SPOILER—is to literally erase Columbia, so that its troublesome history “never happened in the first place.” Which means either that we shouldn’t remember our history after all, or that we real Americans (who cannot in fact erase the past) are screwed, locked into violence and oppression that, once set in motion, can never be stopped.

But that reading assumes a single cohesive reality, and BioShock Infinite is more interested in iteration, multiplication, and possibility. So here are a few of the alternate realities I’ve found myself dreaming about since I finished the game.

• A BioWare or Bethesda game that takes place in Columbia. I want to talk to these horrible sky racists. I want Booker and Elizabeth to have to make decisions about how they’ll treat the city’s minority population. At the very least, I want the two of them to talk about race, which they don’t do in BioShock Infinite, really.

• A game where Booker and Elizabeth go through that first big tear and find that they’re suddenly both black. Or Chinese. Or that they’ve swapped genders. (If you’ve collected all the voxophones, you’ll know that the germ of that last idea is already present in BioShock Infinite).

• A game where you, the player, can mess with the politics and ontology of Columbia, instead of just observing while Columbia gets messed-with all around you. (Achron has proven that time travel can make sense in gameplay, and some of Patholigic’s NPCs are people that the player might have been but isn’t).

BioShock Infinite left me wanting to play those games, and all sorts of other games that don’t currently exist. Like the first BioShock, it’s a game that asks us to think about where videogames can go next, and what games can do. For exactly that reason, I wish it argued more forcefully that videogames can be about things other than themselves.