Rogue Legacy feels like Dark Souls, in some key ways. There’s only one currency, used for all of your upgrades and purchases, and there are some items that you keep even when you die, making go-for-broke one-way trips an occasionally viable tactic. More than that, though, if I’m a paladin, there’s this thing where I can spend MP to block oncoming attacks, which closely replicates the stamina-managing rhythms of a Dark Souls sword-and-board setup.

Now, unlike my stamina in Dark Souls, my MP in Rogue Legacy doesn’t recover automatically. But not to worry! Sometimes my paladin has obsessive-compulsive disorder, and then I get MP back as I smash pots and scenery and tidy up every last monster: Must. Clear. House.

It’s a hell of a thing when these elements all hum together just right, letting me play exactly the way I want. I’m going to keep playing Rogue Legacy because it lets me explore a castle as a paladin with OCD.

But also, I’m going to keep playing Rogue Legacy because it doesn’t always let me explore the castle as a paladin with OCD. Where Dark Souls is about perfecting an approach, Rogue Legacy is about embracing variation-almost-but-not-quite-unto-chaos. 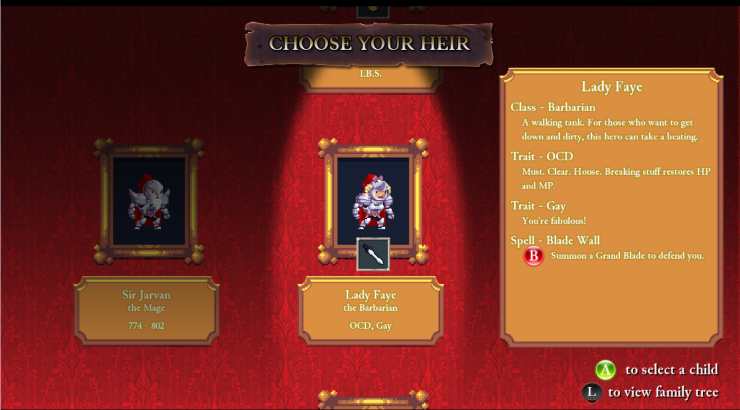 When my lawful good neurotic inevitably perma-dies, you see, my next go-round in the castle will be as one of his three heirs: maybe a colorblind miner, or an abnormally short shinobi, or a hyperactive barbarian queen who also happens to be gay (though that last quality seems to be pointedly irrelevant). I always have a choice, but that choice is consistently novel and reliably odd.

Rogue Legacy strings pre-baked rooms together semi-randomly, after the fashion of The Binding of Isaac, a different castle every time. The demo build I played goes only as far as the first boss, so it’s hard to say whether Rogue Legacy will have Isaac’s pacing, escalation, or staying power—but if it does, it will be one of the best games to emerge from the roguelike-plus-something-else movement. Already it’s a contender, and already it captures Isaac’s intoxicating sense of becoming a weirder and more compelling version of yourself as you adventure.

Or the time that a paladin who really, really likes things neat was born to my noble house, for the first time in ten generations. Much will be expected of that young lady.