A strange thing has started happening to me in the last week or so: I’ve started dreaming about work. Not about my work as a broad and romantic concept, mind you, but about my current day job, working as a trainer/consultant for a software company. (I usually describe the gig by saying that I’m a U.N. translator for various kids of nerds).

Instead, they’re simply dreams about work, dreams in which I’m working, dreams in which I sometimes even get work done, finding somnambulant solutions to mundane problems, inventing new ways to sidestep day-to-day roadblocks. It’s jarring, in a way, this collision of the practical and the surreal, the utterly grounded and the almost free-associative. 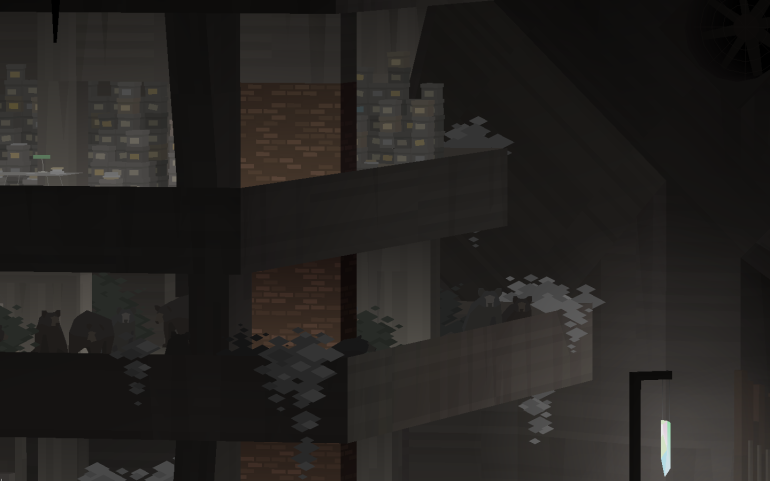 The last time I was on a plane, I fell asleep and dreamed about work. This time, I’m going to stay awake and play Kentucky Route Zero: Act II, which will turn out to hit me that much harder because of the fact that I’ve been dreaming about work (or working while dreaming, or whatever it is I’ve been doing).

When I fire the game up, the first thing I see is a woman sitting at a desk, doing her job (already this is weird for me), and her job is essentially to navigate two equally frightening and frustrating intellectual counter-currents: dream logic and bureaucracy. The whole episode is about the tension between freedom (of thought, of choice, of locomotion) and blankly accepted, bleakly arbitrary, perversely nonsensical rules.

It’s about the cruelties, big and small, that we wander into when we lose our sense of the absurd. Or when we lose our sense of empathy. It’s even kind of arguing that those two senses are one and the same—that being too absorbed in our own quotidian understanding of what’s normal will gradually blunt our interest in being surprised or confounded, and thus our ability to understand people unlike ourselves and environments unlike our own.

This second act is in many ways much bleaker than the first—but it ends on a note of tenuous hope, and more to the point, it’s a beautiful way for Kentucky Route Zero to expand its emotional and aesthetic palette. It’s still a lucid dream, but it’s about an ever-widening swath of dream types.

Dreams about the road, and about family, yes, but also far stranger sub-genres.

Dreams about work, for example.