This is the new chic thing, apparently, releasing frothily anticipated indie games by surprise. Surprise! After a lengthy semi-open alpha, Teslagrad is upon us.

The game takes a handful of interesting gameplay elements—magnetism, electrcity, and short-distance teleportation—then builds heaps of tightly-focused puzzles around the natural consequences of those elements, and sticks the results into a foreboding, lovingly hand-drawn 2D world.

Aesthetic comparisons to Braid are inevitable, though Teslagrad is markedly different both in setting (steampunk as opposed to pastoral) and in visual style (Braid-like, maybe, but Braid by way of Osamu Tezuka by way of Don Bluth). Which is to say, it does have a style definitively (if subtly) all its own, and it’s tremendously pretty. 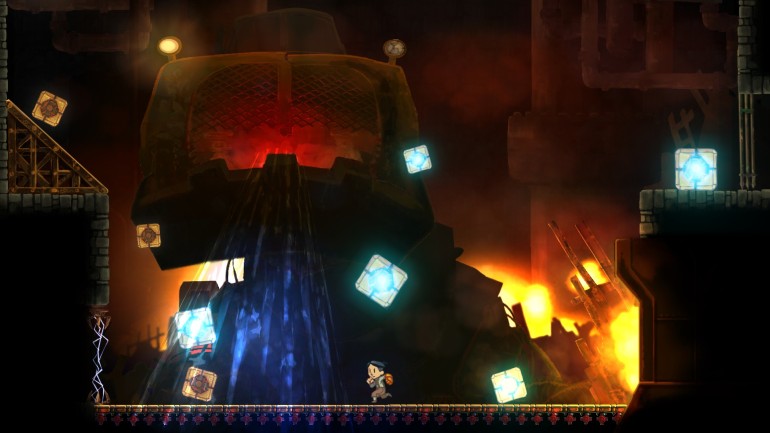 Tonally, it’s a bit Braid (melancholy in the face of newly found godlike powers and the implications thereof), a bit Vessel (technology as your key to a world more wonderful, and more dangerous, than you’d realized), and a bit Limbo—in the acidly affectionate words of Yhatzee Croshaw, it’s “a bleak, arty platformer about a small child with an oversized head in a big scary world—with bonus points if they have to lose their innocence at some point.” Check, check, and—well, no spoilers or anything.

Unfortunately, the Limbo comparison does extend to some punishing, repeated trial-and-death sections. Having to restart a room’s worth of puzzles after your dozenth demise can be annoying. Having to restart after getting 80% of the way through one of the game’s self-styled “old-school boss fights” is legitimately obnoxious (even the Donkey Kong Country games let you take a hit sometimes), as is having to schlep back through previously explored, still-lethal areas in order to collect the game’s otherwise quite fun-to-collect collectables.

But those punishing aspects can’t detract from the joy using your powers in new ways, or from the oddball beauty of, say, stumbling into a puppet show that fleshes out a fantasy nation’s history—the whole experience is admirably, resolutely wordless, save for the droplets of increasingly meaningful text that accompany each Achievement—or happening upon an electrified megalith that may or may not have been worshiped as a god in days gone by.

The importance of letting those images speak for themselves cannot be overstated. In a medium that could really stand to learn when to shut the hell up, here’s a work that refuses to let verbal exposition dumps (or even flavor text) do the storytelling, or the emotional heavy-lifting.

It’s aiming at something altogether more elegant: that holiest of game design grails, the experience wherein narrative and play are inseparable.

As a direct result of that ambition, even when Teslagrad is a bit too invested in the idea of Not Being An Easy Game™, it’s still an awfully easy game to get lost in.