Another new Arcen game! Time for me to celebrate its singular vision and unmatched breadth, and then lament how much I suck at it. You know the drill.

The Last Federation combines the all-scales-at-once space strategy of AI War with the core concept of Skyward Collapse: managing the balance of power among competing civilizations. But the game gets much deeper into politics (both grand and petty) than AI War does—and whereas Skyward Collapse tasked the player with keeping two asymmetrical human societies from wiping each other out, The Last Federation asks you to manage eight planets, each populated with a different alien race, each with its own strengths and weaknesses and its own history and its own political system, for Sid Meier’s sake.

To complicate matters further, your goals are a bit more nuanced (and/or nefarious) than simply keeping everybody alive long enough to erect something culturally significant. No, this time around, your goal is to establish a new and preferably everlasting Federation throughout the solar system. This could mean uniting every race under a common banner through cunning diplomacy, or it could mean bolstering the military might of one until it wipes out all of the others, or anything in between. 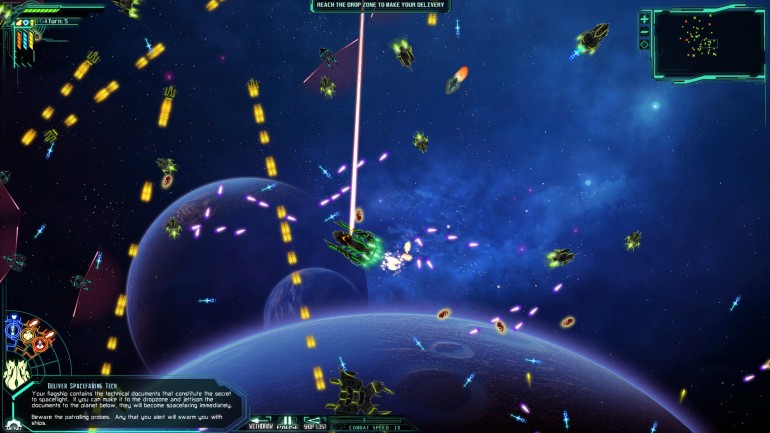 But you’ve got to manage politics, and you’ve got to blow shit up in space. I’ve had no success trying to create my space empire just by one means or the other, and indeed, there are plenty of important actions that explicitly involve doing both: once you decide to bring spacefaring technology to some planet that doesn’t currently have it, for example, you’ve then got to physically deliver the goods to your would-be beneficiaries. Between you and them, a whole lot of shit in space that must be blown up.

There’s a Spectator Mode where you can just watch the eight worlds interact, declaring war, reaching peace, holding elections—news crawling across the bottom of the screen in a sort of grand strategy Twitter feed—seeing populations rise and fall, economies flourish and falter, ships swarm from homeworld to frotnlines, swirling around like an incredibly violent and mathy lava lamp.

Observe this spectacle long enough, and you’ll see the planets forming alliances without any help from you—and sure enough, dive back into a hands-on campaign and you’ll find that you’ve got rebel alliances and rival empires to contend with. And from your perspective, rival empires are just rebel alliances grown to unwieldy scale. Anything that isn’t your intended Federation is a roadblock to be removed and dismantled. 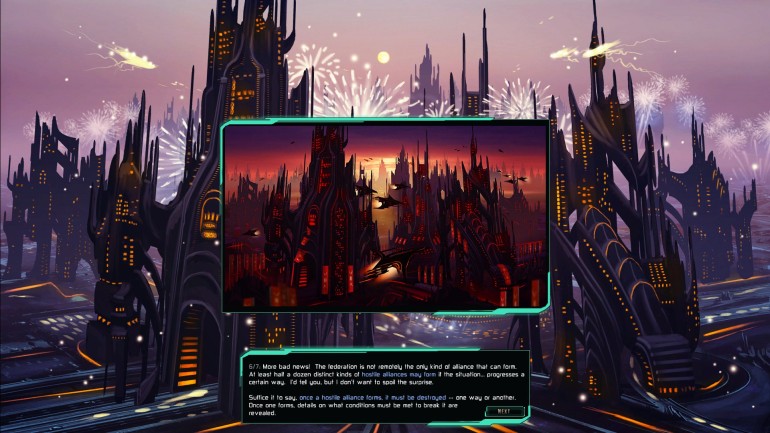 Worth nothing: The Last Federation continues Arcen’s recent attempts to be less impenetrable without sacrificing depth. The default campaign mode introduces new features gradually, slowly dialing up the variety and complexity of tasks—and there are two separate difficulty settings, one for space combat and the other for political intrigue. I tend toward simpler pew-pewing and more complicated diplomatic quagmires, personally. As a rule, I’m all for games letting me say make this harder in this specific way (like the shrine system in Bastion) rather than just make this harder, whatever you think that means. So that helps.

The Last Federation has a propulsive energy (not to mention a pulpy visual sense) that sets it apart from the rest of Arcen’s catalog. It’s a game about the desire to make order out of chaos, and about the grim totalitarian side of that desire, and it explores that theme with rigor, cleverness, and copious gallows humor. I instinctively get the game in a way that I never quite got AI War.

Though I do still suck at it. Let’s be clear on that point.