When I was a little kid, the theme music from the first Legend of Zelda scared the bejeezus out of me. That rollicking beep-boop adventure theme seemed menacing beyond measure. The only thing I found scarier was the Game Over screen in Shadowgate, wherein the Grim Reaper cackled at me (and at my dad, who was usually the one actually using the controller back then; I was two or three).

It seems silly that I classed Zelda as a horror game, given its well-deserved reputation for evoking childlike wonder and the will to explore—but on the other hand, have you played the original Legend of Zelda lately? I hadn’t in quite a while, and so I’d forgotten that it’s basically Dark Souls.

Seriously. You’re in a dungeon, and you’re low on health. You could of course schlep to a fairy fountain, but that would mean dealing with that a bunch of respawned enemies upon your return. It’s the bonfire/estus mechanic. 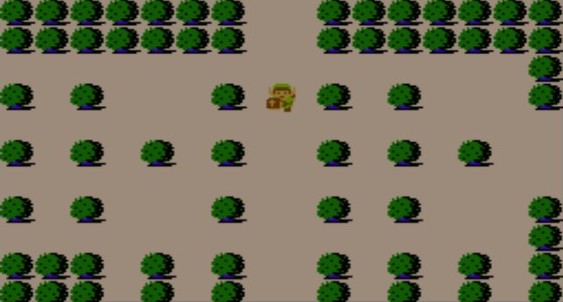 Yes, and you’ve got just one central resource—rupees in this case, rather than souls—that you need for transitory consumables and hopefully-permeant upgrades both. That like-like ate my shield, but buying a new one would mean waiting that much longer for the blue ring (which pointedly costs about as much money as you can ever carry).

The game forces you to make heartbreaking decisions with those rupees of yours. It’s brutal, just brutal, doing very little to stop you from taking on challenges that you have scant hope of overcoming and then, when you die, shrugging and saying Well, you’ve got a fraction of your health and you’re in the middle of nowhere. Now what, hero?

More than that, though, what I’d forgotten is that the world of the first Zelda is an apocalypse in progress. True, there’s an End of Days flavor to the Dark World in A Link to the Past, Lorule in A Link Between Worlds, and the latter time period in Ocarina of Time, but here it’s conveyed with a certain bleak elegance: You don’t meet holdout communities or other would-be heroes in your travels. You meet standoffish profiteers and wise, sedentary, lonesome old people, all living underground. Above, it’s nothing but a swirling chaos of itinerant monsters.

Besides which, the blasted landscape in Zelda 1 isn’t some dark reflection of the world as it might be. It’s neither an alternate timeline nor an alternate reality. It’s just simply, chillingly, the world. Things really have gotten this bad under Ganon. It’s grim out there.

It’s not quite right to claim that there’s no overarching story at play, but what’s there is sparse, cryptic, unyielding, intoxicating. YOU DIED, it says, smirking.

In retrospect, no wonder just hearing it coming was enough to terrify Two-or-Three-Year-Old-Me.

Tags: A Link Between Worlds, A Link to the Past, Dark Souls, Shadowgate, The Legend of Zelda