Alright. I have now played The Binding of Isaac: Rebirth for roughly one fifth the amount of time I played the original Binding of Isaac (both with and without its expansion, Wrath of the Lamb). I have killed Mom (for real) six times (and very nearly one more time in co-op, damn everything). I have killed Satan. I have killed [the slightly spoilery alternative final boss who is not Satan]. I have even found and conquered the demented gauntlet that is the boss rush room.

So now, as somebody who liked the original release a whole lot, I feel reasonably qualified to get some thoughts down. 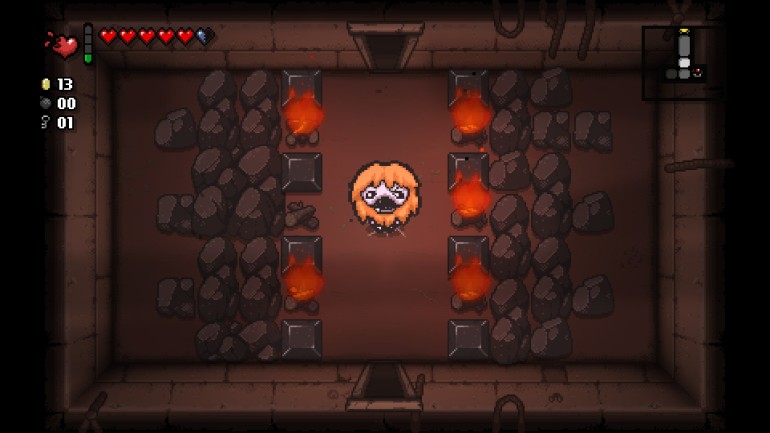 For those who don’t know, the origin story: After the astounding success of Super Meat Boy, Edmund McMillen found himself with some vacation time, and the only thing he really wanted to do with it was make a game. So he and Florian Himsl (with a little eventual help from Tommy Refenes, the other half of Team Meat) quickly produced a tightly focused, deeply personal, and profoundly batshit little game.

Because it was made quickly, and also because McMillen conceived it as a game destined for narrow appeal and maybe even commercial doom, the original Binding of Isaac was rough around the edges. As a game it was uncompromising and brutal—but also, as a piece of software, it was hobbled. Framerate issues, irreparable bugs, all that.

Yet for all its flaws, technical and otherwise, the game resonated. If Isaac’s appeal was indeed niche, then the niche was a considerably larger one that you might think, and the game won a sizable and tremendously passionate following. I personally know people who’ve spent hundreds of hours playing The Binding of Isaac (some of whom would consider themselves mediocre players at best). There’s an Iaaac wiki that’s an absolute marvel of reverse engineering. There’s a fiercely competitive and widely Twitch-streamed Iaaac speedrunning league.

Seeing all of that, McMillen began bemoaning his initial rush job, and he decided to work with indie studio Nicalis to produce a bigger, more polished, more functional iteration of The Binding of Isaac. Hence Rebirth. 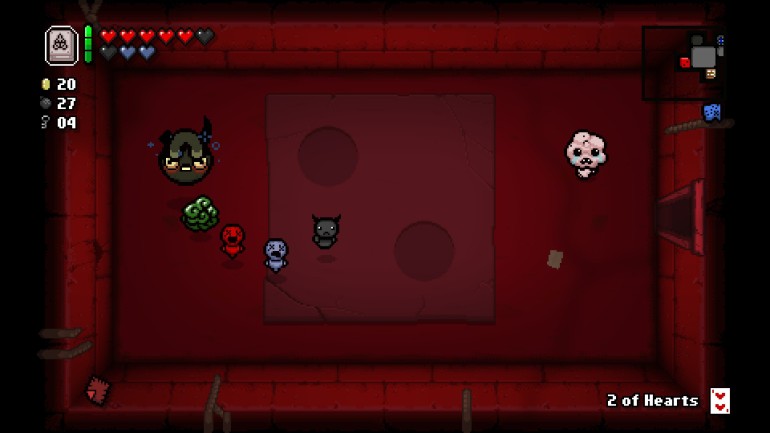 But what’s worth noting regardless is Rebirth’s resultant shift in tone. The old art style suggested strongly that the game’s environments were Isaac’s drawings come to life, that implication emphasized the ragged pathos of the protagonist’s situation. The new art style feels more like Isaac has escaped into the lurid ultraviolence of an imaginary videogame, emphasizing one of the game’s other major themes: as I said back in 2011, Why do we want to escape to worlds where everything is trying to kill us?

And the new music works in consort with the subtler lighting to enhance that feeling that you’re going down further and further, deeper, always deeper. In the Basement, the are still shafts of what might be sunlight. By the time you’re in the Depths—to say nothing of true lategame areas—the darkness starts to feel suffocating in a way that, for me, it never did in the old Binding of Isaac. Again, better or worse, it feels markedly and meaningfully different.

The result is a game that will never entirely replace or supplant its predecessor/former self, but that offers a more polished point of entry for newcomers and a fresh perspective for veterans. (Also: co-op! It’s perverse and enthralling, just how much less lonely I feel while I’m adventuring with what is probably a ghost or an imaginary friend or some combination of the two).

That’s exactly what I wanted from this remake, personally. I love the idea that the first version still has a feel all its own, but that the game itself—the essence of it, vividly realized, utterly singular, and weird in ways you couldn’t fake if you tried—is no longer shackled to its technologically shaky origins.

In that sense, it’s a bit like Spelunky. People still love the “SD” iteration, and are continuing to do remarkable things with it, but it’s the remake that I’ll be sharing with friends and family, using as a gateway drug for would-be roguelike-alike devotees, and playing for—let’s be frank here, people—a great many more hours.