Gravity Ghost is a game about jumping and flying through lush, physically plausible star systems of painterly planetoids. The most obvious point of comparison is Super Mario Galaxy—not only because you’re hopping tiny planets and collecting stars, but also because of the game’s emphasis on invention, surprise, avatar acrobatics, and colorful, exuberant visuals.

Here, though, each level is a bounded 2D playground rather than a semi-3D, quasi-scripted obstacle course, and the gavity has an Osmos-like verisimilitude. There’s “no dying, no way to fail” as the game’s Steam page says, and there’s certainly no vestigial, incongruously arcadey lives system. There’s just you, and the galaxy, and the question of exactly who you are and what you’re doing there. 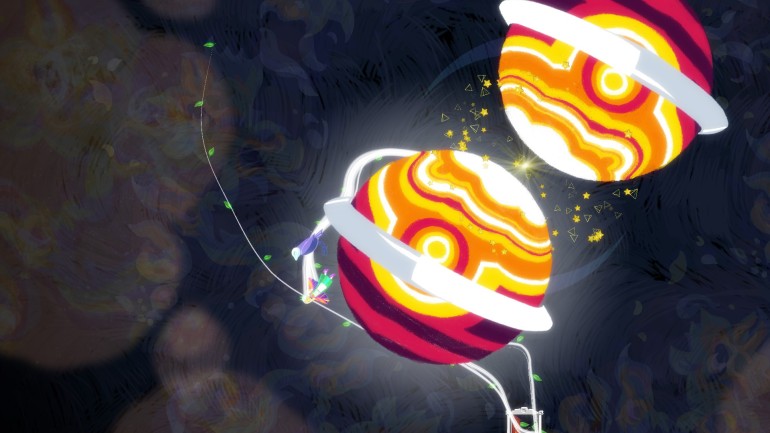 There’s no dying, but that’s not to say that there’s no death. As that second half of the game’s name implies, you’re not simply in space. There’s something a bit more metaphysical, and also a bit more melancholy, going on. “Welcome to the afterlife. Here is your hug,” protagonist Iona says in one of the earliest levels of Gravity Ghost, summarily setting up the game’s wistful tone and its warm-and-fuzzy gallows humor. Everything is wondrous, magical, even joyful, but that doesn’t mean that everything is going to be alright.

It’s a world of uncertain (but intuitive) rules and incompetent (but generally well-meaning) care-takers, and Iona approaches it with the stoicism that actual kids can bring to actual adversity—that same dauntless, unafraid forward momentum that keeps Wren and Reynold going in the Costume Quest games.

I’m pretty entranced with Gravity Ghost, not least because its emotional beats and its playful physics both ring true, but also because its tone is so precise, deliberate, and distinct. It’s clearly a deeply personal work, and its numerous earnest eccentricities make it sing.