“What makes this shot the right one,” in the context of cinematic language? That’s the question. Should a given scene or shot or frame be jarring, or ugly, or funny, or surprising, in order to make the movie as a whole beautiful and soulful? When you ignore that question and try to give the whole piece a single fanatically enforced tonal angle, the effect can be, in short, really fucking weird.

Purely in terms of tone, then, Maize is easily one of the strangest games I’ve ever played. It’s a game about walking, talking corn monsters. It tries to be at once a sci-fi horror story, a richly detailed walking simulator, a Pythonesque free-associative anti-authoritarian comedy, and a find-objects-and-rub-them-together adventure game throwback. Or rather, at various times it seems to want to be all of those things, but in the end it seems to want simply to be wacky, wacky above all else, wacky as a tonal gloss over everything.

Absolutely nothing gets played straight, but the environments are too vivid and unnerving to act just as backdrops for farce or parody, and the comedy isn’t biting enough to have anything to do with the overtones of impending doom. Maize is at moments eerie, or beautiful, or oddly affecting, but it always insists that no, actually, it isn’t any of those things. It’s just wacky, and don’t even think about thinking otherwise.

The game’s first few minutes are ostensibly dedicated to creeping horror. You’re walking through a lonely bloom-lit corn maze, winding your way past Stanley Parable office furniture and on to an abandoned farmhouse, accompanied all the while by a music loop right out of an old Hollywood monster movie. But there’s this cheeky flavor text, and this incongruous TING! noise when you rub the right item on the right item. And you see the monsters right away, albeit only for a moment, thus evaporating most of the tension.

And there are these big orange boxes that disappear when you find certain arbitrary objects. You’re notified when they disappear (except when you’re not). “Good for you,” the game literally says when a new path opens. Sometimes old paths close off. Sometimes there’s a narrative justification for this. Sometimes there isn’t. You’re clearly being watched and tested and fucked with, but Maize can’t seem to decide whether that fact is supposed to be creepy or funny or some kind of metatextual comment on arbitrary gating in game design.

For most of the game, you’re just combing through cluttered, unaccountably cosy environments for the items you need, hovering over everything to see what’s selectable and then slotting that somethingorother into a bespoke non-diegetic outline someplace. There’s often no other way to figure out what should go where, since you’re progressing without even the flimsiest or most illogical justifications for doing so—and every single item has exactly one use (and indeed, will disappear once you’ve found that singular use), so trial-and-error-and-backtracking will yield better results than any kind of lateral thinking.

Most of the objects strewn about can’t be picked up, and fully seventy-five of the items that can are nonetheless unusable. You need a footstool, but a chair that would have been just as useful is a “folio item” that evaporates into a nugget of lore upon pickup. I’m one of those weirdos who actually enjoys the moon logic of olden-time adventure game inventory puzzles, but man, Maize pushes it (though not to the lurid, meditative extremes of, say, Cradle.)

Probably, I think it’s just supposed to be wacky.

For most of Maize, you’re accompanied by a little robotic teddy bear named Vladdy, who squeaks ceaselessly and cracks wise. Typically, a companion character like Vladdy would take every opportunity to dump exposition on you and ham-handedly attempt to endear himself. Vladdy does not do this, which is in itself is refreshing. Instead, he says pretty precisely the same thing over and over, which sucks.

Vladdy is Clint Hocking’s complaint about Bioshock personified: “The game openly mocks us for having willingly suspended our disbelief in order to enjoy it.” I don’t think he’s meant to come off as acerbic as he does. I think the idea is just to be wacky, and self-effacing about the game’s conceits. But over several hours, the effect of Vladdy’s truculent one-note complaining is oppressive.

“What now, idiot? More stupid walking?” he asks as you backtrack.

“Great. We did it. Why did we do this?” he asks after you’ve solved a puzzle.

“So, what dumb thing is next?” he asks as a new area opens up. 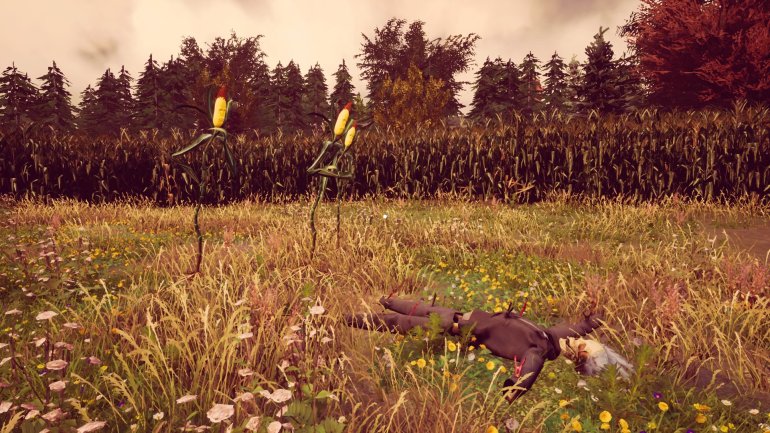 If Maize were as dumb as it wants to be, then I don’t think it would frustrate me half as much as it does. Sometimes the jokes really land. Sometimes it’s dark. Sometimes it’s affecting. But it refuses to own these beats, refuses to own up to being anything other than a fuck-off romp—and can’t even commit fully to being that, given the head-scratching, incongruous notes of sorrow and wonder.

The ending is the clearest example of this, but I won’t spoil it, even though apparently the game thinks I’m dumb for caring one way or the other. There’s some genuine (if only partially earned) catharsis in that ending. It’s actually funny—if you’ve played the game, then you’ll know that Checkov’s English Muffin has a fun little payoff—and weirdly evocative. That is, until someone (not Vladdy) says “You are all such idiots,” and the whole shebang turns out to have been for nothing.

And there’s something in that, actually! Some thematic heft about how most tragedy arrises from incompetence rather than malice. But it’s muddled. There’s a more layered work just beneath the surface of Maize, peeking through again and again before being whacked down and papered over.

And yet it left one hell of an impression on me, if only as a hallucinatory, Iñárrituesque case study in tonal strangeness. Maize means more than it means to. It can never mean as little as it insists it does.

Like I said, it’s so fucking weird, especially in ways it doesn’t quite mean to be.