For so long, this series was one of those things that sounded like my jam on paper, but that made no sense to me in practice. I like systems layered on systems, I like unforgiving fights against intimidating foes, hectic cooperation—all the things these games known and loved for. I live for devious complications. I treasure games that thrive on heresay and rely on fan wikis. That’s Monster Hunter all day.

And sure, Monster Hunter is tonally jarring to a new player, mostly because its simulated violence lacks the standard-issue narrative veneer of moral uprightness—the monsters aren’t monsters, aren’t agents of evil; they’re wildlife, and newcomers feel bastardly beyond belief when pursuing some spent, limping dinosaur to its nest to finish it off—but no, it was something more than that.

When I tried Monster Hunter on the Wii or the 3DS, I always had the sense that I was missing something fundamental. And I was, is the thing. 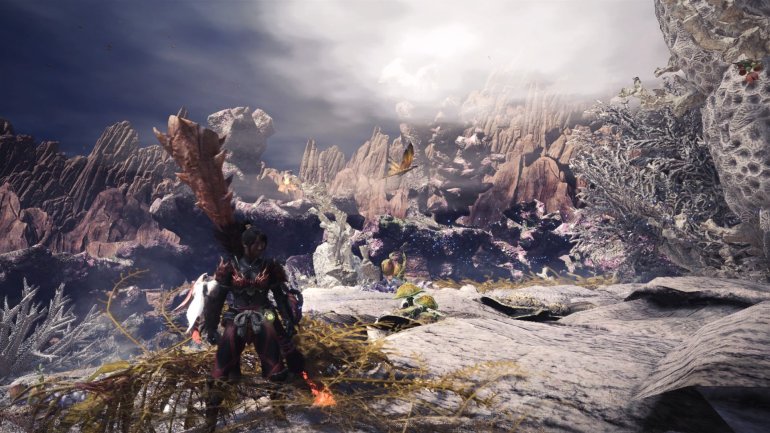 What I never got about Monster Hunter, and what I wish someone had explained to me, is that using your weapon is itself a challenge. Using the thing well will come later. Don’t even worry about that for now. Simply pressing one of your two attack buttons and having the attack connect, or hell, just having a clear idea of what your character is going to do, and for how long—that most basic of stuff is an obstacle.

Learning to use a weapon in Monster Hunter is not like switching from curved swords to straight swords in Dark Souls, say. It’s more like learning a new character in a fighting game. The movesets are quirky and particular, the timings counter-intuitive and full of hidden combinatorial potential. This means that when a non-player character talks to you like you’re a specialist, they’re not just flattering you because you’re the protagonist of the videogame (though they are of course doing that as well). No, you are a specialist. You have to be, to even swing the unwieldy thing in your hands with anything like intent, much less precision.

It’s easy to forget this. I already find myself forgetting it, now that I’m comfortable with my weapon—now that its eccentricities are second nature to me, now that I’ve crafted a really nice one, with enough elder dragon parts leftover to make myself a cool matching jacket. It’s easy to forget how uniquely unwelcoming it was to learn my bizarre, ridiculous weapon, even though its unwelcoming nature is as essential a property of Monster Hunter as monsters or hunting.

What made this notion click for me, if you’ll indulge me as I bring it up yet again, was thinking back on Getting Over It with Bennett Foddy, specifically the part where Foddy explains what first attracted him to Sexy Hiking:

Anyway, when you start Sexy Hiking, you’re standing next to this dead tree that blocks the way to the entire rest of the game. It might take you an hour to get over that tree, and lot of people never got past it. You prod and you poke at it, exploring the limits of your reach and your stregnth, trying to find a way up and over. And there’s a sense of truth in that lack of compromise.

Most obstacles in videogame worlds are fake—you can be completely confident in your ability to get through them, once you have the correct method or the correct equipment, or just by spending enough time. In that sense, every pixelated obstacle in Sexy Hiking is real.

Wielding a weapon in Monster Hunter is a real obstacle, in that specific way that the dead tree in Sexy Hiking is real and the climbable walls in Horizon: Zero Dawn are not. I think that’s why I was drawn to outwardly weirder weapons like the insect glaive and and hunting horn. It felt absurd to misunderstand a katana, but it made perfect sense to baffle at a moth that farts explosions, or a magical healing djembe.

But hey, I found my way in, not because Monster Hunter World is all that much simpler than its predecessors, but because it’s vastly clearer about which parts of its design are merely unfriendly and which are unfriendly for a damn good reason.

And there’s a sense of truth in that lack of compromise.