Toki Tori is renowned for the contrast between its whimsical audiovisual aesthetic—A cute chicken protagonist! Exuberant synths and woodwinds!—and its unforgiving gameplay aesthetic, after the fashion of Lode Runner or the innumerable Crazy Castle games. (I always think of The Bugs Bunny Crazy Castle 2 on Game Boy, but more because it’s the first one I encountered than because it’s the gold standard; even just typing that syntactical nightmare of a title floods me with memories). 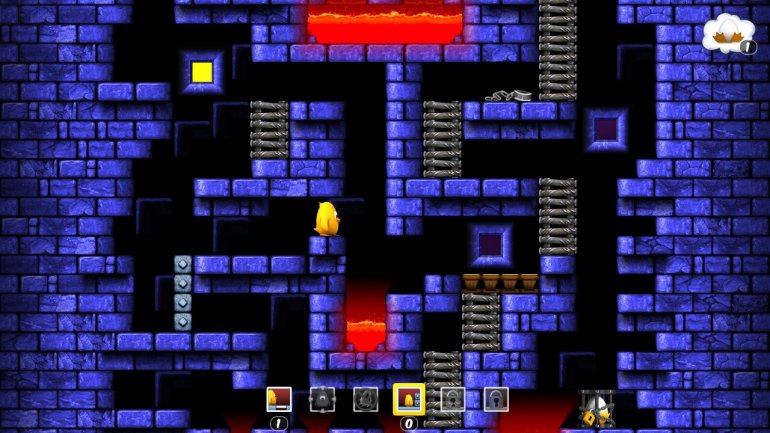 Your character waddles inartfully when on the ground and floats inexorably to whatever is directly below him when he steps off an edge (but timing is often still key). New tools and mechanics are explained in text boxes before the level starts, and those with itchy fingers are unlikely to glean that same information from the level itself (trust me). Your goal is to collect all of the eggs in a given level without trapping yourself or dying. To that end, you plug initially impassable gaps, you avoid or neutralize enemies—and you’ve got a finite supply of bridges and freeze rays and teleporters to use to those ends, and generally there’s only one correct way to use them if you’re going to succeed.

It’s vastly, and maybe even jarringly different from the open-ended and intuitive ethos that’s become prominent since. This was true to some degree even when the Game Boy Color original came out in 2001, when Toki Tori was a kinda-sorta-throwback to the Two Tribes folks’ previous game Eggbert, which came out in 1994—the same year that the Game Boy Donkey Kong refined and reinvented the puzzle-platformer, mostly by taking the platformer side of the equation seriously, and thinking in terms of level design rather than puzzle design (and also, by introducing new mechanics in little wordless skits rather than text dumps). Eggbert didn’t do any of that. Even it was old school, even then. A remake of a spiritual successor to a throwback, then, Toki Tori will always feel unstuck in time.

Who is this voice talking to me in the tutorial text? I kept thinking. It’s the developers themselves, of course, brightly and helpfully breaking the fourth wall to explain their oddball creation, harking back to a time when of programs made by nerds who thought other nerds might enjoy them, not apps passed down from the halls of some rarified game dev Olympus. There are woolier and more intimate ways to think of games than as apps, and it has ever been thus, and playing something as old school as Toki Tori reminds me of that, and it’s invigorating. 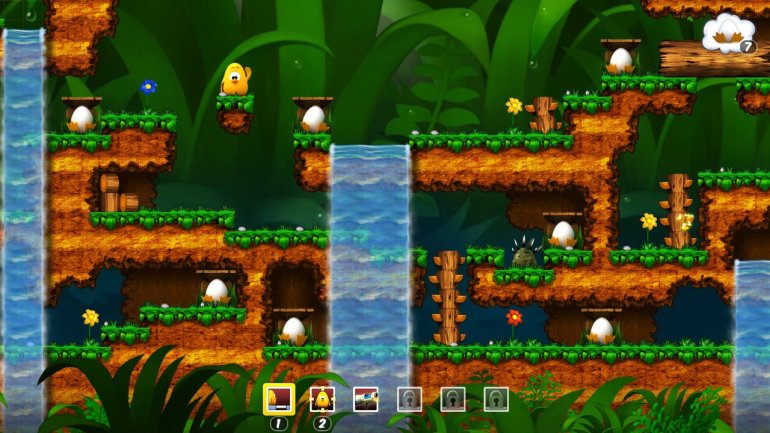 Which is not to say that all of the game’s Eggbert-era rough edges are intact. Rather, the Switch version released last week is based on the 2010 PC remake, with its updated graphics—trading in the low-pixel, felt marker vividity of the original for an HD candy-gloss—and the enormously welcome ability to rewind your actions, rather than having to start the entire level over should you make a bad single call.

But often enough, the bad call in question was a failure to plan ahead from the start, and you’ll be rewinding more or less to the beginning anyway. Such is the unyielding nature of the beast, cute though the beast may be.

And it is cute, and charming, and inventive, and olde-timey in a way that few modern games, retro affections or no, even try to be.