I’m going to join the chorus that’s been singing this refrain: Gone Home is a beautiful game, and the less you know about it going in, the more you’re likely to get out of it. So if you’re at all interested, you should try to go in cold—and not just because pretty much everything is better when you go in cold.

John Walker did an admirable job of explaining what’s so interesting about the game without going into plot specifics. Leigh Alexander, too. You won’t significantly diminish the game’s surprises by reading those articles, or by knowing that whole game takes place in a single house, or that it follows in Dear Esther’s minimalist footsteps (with a similar attention to tone and environments, and a similar lack combat, puzzles, and other game stuff, but with markedly more interactivity).

And you may have heard that Gone Home aspires to realism, relying on only a few videogamey contrivances. When it’s time for you to go to a new room in the house, the key to that room has a funny way of being nearby. When you find a cassette tape or an LP, it has a funny way of always being one song from the end. Things you discover get marked on a (completely optional) map. But none of that detracts from what the game is trying to do, and more to the point, none of it is spoiler stuff.

Nor is it a spoiler to say that Gone Home takes place in 1995, and that it therefore captures a time when teenagers, in communicating with one another, left sizeable paper trails. So let me talk about that for a moment.

I have boxes full of painfully earnest hand-written notes, on innumerable scraps and fragments of hardened and yellowing paper—but that at a certain point, I switched over to Instant Messages, the logs of which I’m finding I’ve kept, creepily enough. Then I moved on to text messages, which I didn’t log—did anybody?—but often unceremoniously deleted. Odd to think about.

Teenagers still text, but now they also use Facebook and Google, and all of that stuff gets filed away, consigned to Big Data. So would-be archaeologists of teenage drama, such as the player-character in Gone Home, will still have a rich, deeply felt chain of evidence to follow in years to come. But those records will lack the tactility that Gone Home, with its nigh-unprecedented attention to quotidian physical detail, manages to simulate. Crumpled notebook paper. Notes taped to the backs or insides of books.

The thing is, cell phones had limited storage capacities when I was a teenager. Limited to the point that they could only hold so many text messages. So many wasn’t all that many. I’m certain that a great many of the most passionate words I’ve ever written or will ever write are simply, permanently, irretrievably gone.

Come to think of it, I have this vivid memory of forwarding myself every text message that I’d ever sent to one particular girl, or that she had ever sent to me, so that I would have them on my new phone (and so that I would then have them forever, I guess). I remember feeling like this was an unhealthy, laborious, obsessive-compulsive thing to do, trying to etch those conversations in stone instead of letting them dissolve and disappear. It was, undoubtedly. Kind of unhealthy, I mean. 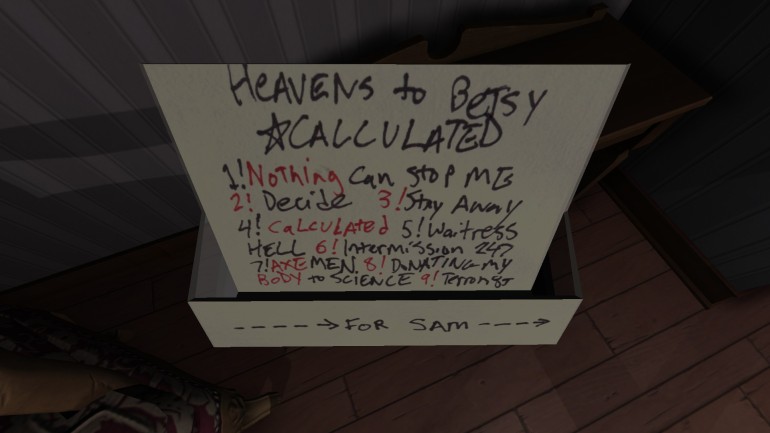 Yet the older me, a little more at peace with my packrat tendencies, and also a lot more aware of what it means to study a history, personal or otherwise—that older me thinks, man, how many correspondences disappeared in that bizarre transitional period after everyone stopped writing everything down on paper, but before Google and Facebook started recording it all for us? How many narrative threads are just plain lost? Did we experience a brief but acute evidentiary dark age, between the closing of the Age of Letters and the dawning of the Age of Twitter?

Maybe I should be embarrassed about having written all that. Maybe I should be glad it’s gone. But (Gone Home forcefully and convincingly argues) those unfiltered, embryonic, momentary thoughts aren’t just embarrassments. They teach us who we are. Memories as worlds within worlds, our writing as selves outside of ourselves. So I mourn my text messages.

Gone Home gets you thinking about that kind of thing.

It also gets you thinking about how, seriously, it would be incredible to play a BioShock-scale game in which you didn’t have to murder hundreds and hundreds of people, or put on magical haunted pants, or whatever. I mention that because most of the Gone Home’s team worked on the BioShock 2 DLC “Minerva’s Den” (widely considered the best thing about BioShock 2), and there’s a clear through line from the one projects to the other—a move away from world-hanging-in-the-balance operatics and toward human-scale storytelling (which can, perhaps ironically, be so much more intense in the telling).

Gone Home confidently shows us what videogames can do when they’re no longer hamstrung by all the things they’re supposed to do. It hit me hard, and I expect that it will stay with me for a long, long time.