King Arthur’s Gold is ridiculous. It asks players to improvise and collaborate, and what they’re collaborating on is sheer, frequently joyous almost-chaos.

There are two teams, capturing flags or fighting to the death or, in my favorite mode, competing to capture and hold one another’s halls. These halls serve as spawn points, and they allow players to switch freely among the game’s three classes. You’ve got knights, who’ve got swords, shields, bombs, and perhaps most importantly, hit points aplenty (making them the front line of just about any assault). Then you’ve got archers, who have grappling hooks and ranged weapons (making them deadly snipers, even if their sniping feels like a ninja-rope-and-bazooka combination from Worms Armageddon).

And finally you’ve got builders, who can mine the world’s component blocks and then put them to good use, Terraria-style. Builders are less than useless in direct combat, but they’re the ones who can concoct defenses—impregnable towers, spike traps—and also the tools to breach those defenses—catapults, explosives, more explosives. In the aforementioned “Take the Halls” mode, these defenses and offenses push against one another, in conjunction with volleys of arrows and desperate sword fights. 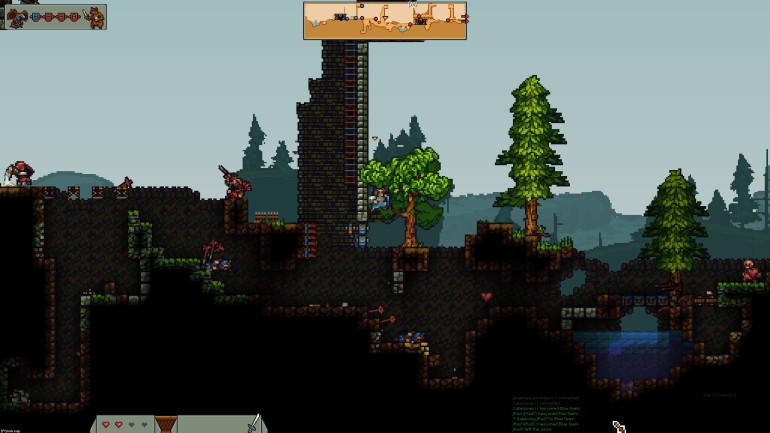 Each encounter is a gleeful burst of cartoon ultraviolence, punctuated by sprays of pixels and rolling chunks of ragdoll sprite limbs—and weakened or unsupported structures crumbling, in a marked departure from the gravity-optional physics of Terraria and Minecraft.

Spectacles of attrition. That’s how I’ve come to think of the wild, demented skirmishes in King Arthur’s Gold. Tremendously absurd encounters, pushing against one another until one of them manages to be so absurd that it gains somebody or other some ground.

Offensive and defensive strategies develop organically, because they have to. Even the best laid plans will require revision, adjustment, and inventive use of the game’s core mechanics. Oh, of course, I found myself thinking after a few matches, of course the knights’ shields double as hang-gliders.

At one point I was playing as an archer, and I’d perched myself on a cliff high above a lake, picking off hapless besiegers as they tried to approach—for about six seconds. Then a newly arrived knight, after only a moment of hesitation, nonchalantly detonated a bomb in his own face and rode the explosion up to my cliff. I was promptly and decisively bisected.

It took me a few stunned seconds to decide whether it was fair. Then it took me several more seconds to wipe the smile off my face.