Hero Generations is one among a recent spate of games that explore player-character mortality. But here everything overexplained or overcomplicated in, say, DoubleFine’s MASSIVE CHALICE, is stripped down to turn-based basics. Each turn takes a year of your current character’s life—though key events might elongate or shorten your life expectancy—and “milestones” govern character growth: adulthood brings greater combat strength and physical prowess; old age, not so much.

Mortality constantly hangs over you, yes, but so do certain inevitable rites of passage. You won’t be a vigorous young man much longer, so maybe stop thinking so much about slaying the evil dragon-thing Ragesquid and start thinking about finding somebody nice with whom to start a family. 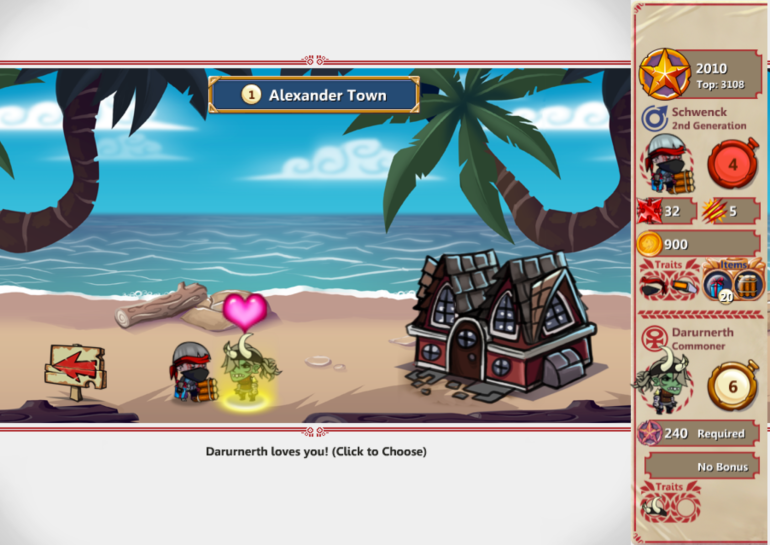 Once you do meet and woo your mate, you settle down. Adventure into your twilight years before doing so, and you could leave a stronger legacy for the next generation—and not incidentally, you might well win a more prestigious partner—but since you’ll have had fewer years with your spouse, the two of you will have fewer traits and stat bonuses to pass along.

With all these darkly playful RPG eugenics, the game requires you to weigh individual glory against caution and calculus, personal achievements against farther-reaching ambitions that House You could never hope to realize in a single lifetime. It’s a radically pared down MASSIVE CHALICE, crossed with a twitchier Desktop Dungeons, if you go in for that kind of analogy.

It’s gleefully bleak and carefully tuned, and probably the purest delivery system yet for the robust-RPG-where-you’re-for-sure-gonna-die-and-the-world-will-go-on-without-you idea.