I’ve been having a hard time figuring out what to say about Bloodborne. I thought about focusing on how freakin’ Victorian the whole thing is—the way that it draws not just from horror mainstays like H.P. Lovecraft, but also from from primordial psychoanalytic theory: the Hunter’s Dream as a literal Jungian collective unconscious, the Hunt itself as a Freudian nightmare of unbridled Thanatos and babies-and-female-reproductive-systems-as-body-horror.

Bloodborne isn’t just co-opting an era’s aesthetics, but also that era’s most pervasive fears about what our minds are capable (and incapable) of grasping and (mis)interpreting. Does the game’s semi-titular illness turn people into beasts, or does it simply make them see other people as beasts? Or both? And if we’re all having this hallucination together, then at what point does there cease to be a meaningful difference between that hallucination and the “actual” world?

That stuff pervades Bloodborne, but let’s not focus on it for the moment. 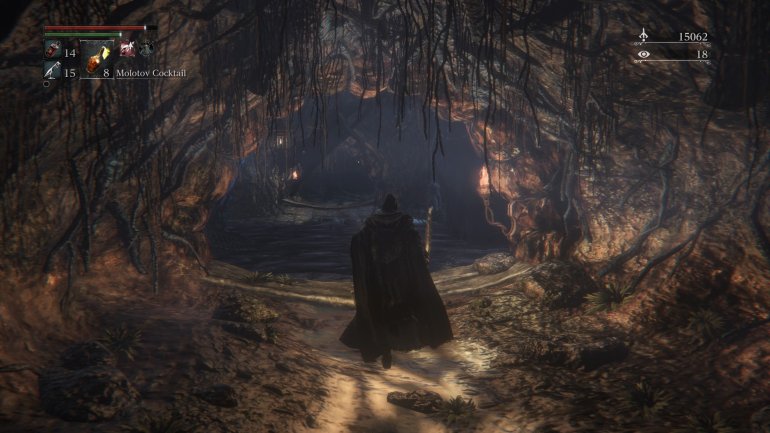 For the moment, let’s focus on one of Bloodborne’s more ambitious and bizarre features, the Chalice Dungeons. By defeating optional bosses (which you might not initially know are optional, this being a game of branching paths and all) you earn Chalices which, in combination with Ritual Materials, generate dungeons three to five layers deep.

Each layer follows a sort of Zelda structure, with a boss behind a locked door, a switch that unlocks that door, and (at least) one big old treasure chest. Sometimes these chests contain new weapons, or weapon-enhancing Gems, or character-enhancing Runes—but far more often, they contain materials to make newer, better (i.e. worse) Chalice Dungeons.

Now, the dungeons you’ll make at first are the same every time you make them, and indeed every time anybody makes them. They’re referred to, half-mockingly, as “story mode” by Chalice Dungeon devotees. But in those “story” dungeons, along with lots and lots more Ritual Materials (which you’ll need, grind grind grind) you’ll find Root Chalices—and these, at long last, can be used to procedurally generate genuinely new layouts and loot combinations.

If it sounds like you’ve got to jump through a moderately absurd quantity of flaming hoops in order to even access this portion of the game, then you’re dead-right. It’s pretty typical of Hidetaka Miyazaki and From Software that Root Chalice Dungeons aren’t just a roguelike hidden within Bloodborne but a roguelike hidden really deep and really well within Bloodborne. But it’s in there, this Souls roguelike, and—again, just as you’d expect from From—Root Chalice Dungeons do some fantastically odd things with the genre. 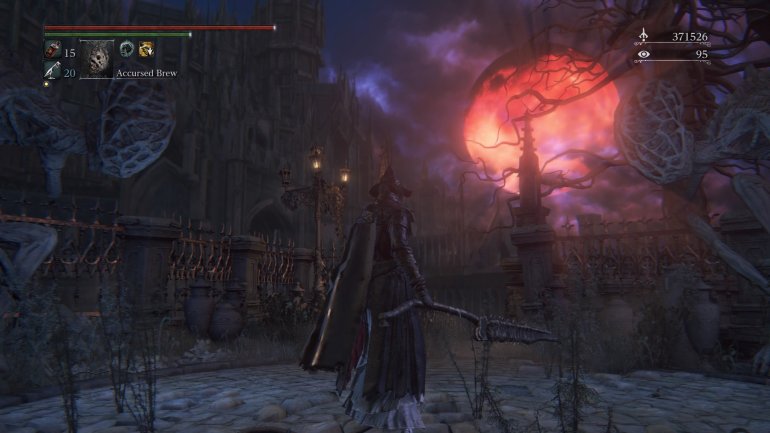 There’s a sense of gambling and giddiness in spending your initially hard-won materials to create a new Root Chalice Dungeon, and a real sense of ownership over the result. You can share your dungeons with others—for co-op or PvP or just for the sake of hey, look what I made!—and I won’t be taking down my first-ever Depth 5 creation anytime soon. It’s a truly neat little adventure, full of powerful Gems and cunning traps and witches fighting to the death with Bloodletting Beasts again and again. But of course, more than that, it’s mine.

Other roguelike-alikes allow you to share particularly good adventures using seeds, but here the seeds (called glyphs) are front and center, inviting players to catalog and compare. The dungeons generated here are, or at least can be, far less ephemeral than your average run in Rogue. No, here you can throw yourself against the same challenge again and again, in true Souls style, before you wander off to a functional infinity of other maddening challenges.

As such, there is one roguelike feature most decidedly not on display here, namely permadeath. Your Bloodborne character is your Bloodborne character, infinitely respawning no matter how many times YOU DIED. But really, having a fussed-over RPG character as your constant is the logical extension of the permanent upgrades you can unlock in The Binding of Isaac or Crypt of the Necrodancer. You can find a sense of freshness in each spelunk without having to lose everything each time and start entirely from scratch.

The rooms are pieced together from a set of templates and component parts, but the function of each space can change radically. A room with a long staircase and a well-guarded chest at the top might next time be empty of combat, just the great staircase adjoining other, fuller rooms, building tension, unsettling you.

All of which works well with the game’s Victorian preoccupations, fostering a sense of the uncanny. You’ve been here before, but you haven’t. You know what to expect, but you don’t. You can always come back and try again, except when maybe you suddenly can’t.

Roguelike-alike experiences celebrate the joy and catharsis of letting go, but the Root Chalice Dungeons simultaneously foster a desire to hold on—to your beloved character, to a particularly excellent dungeon, to the materials you’re hoarding to make something even better. (And like I said, my creation isn’t going anywhere. The glyph is eeuzvsmh, in case you’re curious).

The roguelike hidden in Bloodborne is exactly what you’ve come to expect from Miyazaki and company: a strange, invigorating, beautifully and stubbornly executed take on an increasingly familiar set of ideas.

Tags: Bloodborne, Crypt of the Necrodancer, Dark Souls, Dark Souls 2, Rogue, The Bidning of Isaac, The Legend of Zelda