I had the much-appreciated chance to interview James Silva and Michelle Juett Silva, also known as Ska Studios, the team behind Salt and Sanctuary. I told them this story.

After beating the game’s first boss, I worked my way down to the Village of Smiles. I deftly dodged a trap—the third time, that is, having been killed by that same trap not once but twice, but hey—and then I hopped down and down and down, fleeing enemies, descending into parts unknown, getting in way over my head, burning through all my healing items at alarming speed, struggling to use my new spear effectively.

Finally I landed at the bottom of a deep ravine. I’d been hurt by the fall, but I had a sliver of life, and I was leaden down with the salt that I’d need to level up. I started combing through my inventory to see if I had an item to warp back to the last sanctuary I’d hit—there was small chance of my advancing much further in my present condition—when I saw the flock of bats chasing close behind me. Well, fuck.

I killed the bats in a single stroke. I was safe. Everything had gone fakakt, but then, success.

That’s the fundamental feeling that Salt and Sanctuary and other souls-like games can give me that others can’t (excepting the original Legend of Zelda, of course). The feeling of seeing everything going to hell and knowing that you can still make it through. The thrill of becoming stronger by sheer force of attentively fucking up.

I talked to Ska Studios, and I told them that story, and it became strangely appropriate when I somehow managed to misuse my Skype recording software and lose the whole interview. This was a loss far keener than that time I lost 100,000 souls to Smough and Ornstein and then a silver knight murdered me out of my chance to get them back. This was bad, and to say that I apologized profusely to Michelle and James is to forever expand the very concept of profusion. (Truly: sorry again, Michelle and James).

But in the true spirit of Souls, I intend to make something meaningful of my fuck-up. I don’t want to belabor this particular point, because I’m not saying this ridiculous little article is a triumph on par with killing the headless variant of the Bloodletting Beast in Great Pthumeru Ihyll—let’s not get carried away—but I do want to take the lesson that it’s possible to lose something valuable and irreplaceable without going to pieces about it. What hard games demand, and what the Souls demand more and more effectively than most, is that “Sisyphean stoicism” that renders all failures useful, all setbacks temporary.

Michelle said that there’s something profound about the way that Dark Souls makes you earn your successes, the way the odds are consistently long but never insurmountable. “It’s almost like the American Dream,” she said, although I may be paraphrasing, because as I may have mentioned, I’m a goddamn idiot and I goddamn lost the goddamn interview.

Salt and Sanctuary is a souls-like to the core, in that it’s a world where the American Dream is manifest: that is, a true meritocracy. You really do get what you earn, starting out weak and growing in status and power, but earning every inch, always earning it, always deeply deservng your newfound prestige and efficacy. The game’s demanding nature means that your victories never feel cheap—and also that, even in the endgame, the experience never descends into hollow power fantasy. It’s still a power fantasy, mind, but it’s an oddly humbling one. You become a being of extraordinary puissance, but also, you’re forever tangling with forces greater still. 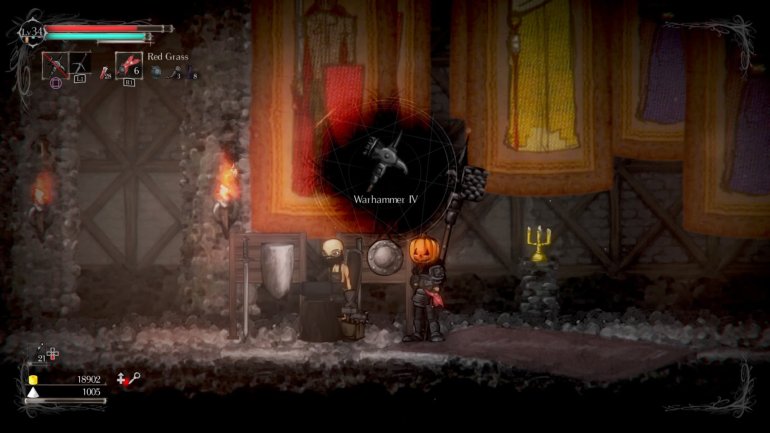 In Salt and Sanctuary, those estimable gameplay philosophies come filtered through a 2D platform-and-slasher in the vein of Castlevania and Ninja Gaiden and Ska Studio’s own previous Dishwasher games. The dodging and attacking feel akin to those games, but the intricate character development and vast array of lore-soaked gear, as well as the elegant stamina system, is all highly soulsean.

Salt functions as souls—or maybe more like the way blood echoes act in Bloodborne, providing a unified currency while also implying that this is what we’re all made of, we’re all inevitably and sometimes-disgustingly embodied, we’re made of stuff, deal with that—while gold provides a “softer” currency (James’ word), some but not all of which is irrecoverably lost on death.

Sanctuaries acts as bonfires, and are intimately tied to the game’s Creeds, which are similar to the covenants of the Souls games, but with the implication that religious practice is central to the day-to-day of adventuring. NPCs will be present or absent, and react to you differently, based on the god or gods you choose to worship, and the relics that you place on sanctuary altars. The rooms will fill with the iconography of your Creed, and the world will look and feel different. Paths will open and close to you.

The Creeds themselves draw heavy inspiration from the Song of Ice and Fire series. Nor is Salt and Sanctuary shy about that fact, going so far as to have one of the first questions you’re asked be, “Do you keep the new gods?” There’s an ancient and innumerable and unknowable pantheon (The Iron Ones rather than The Old Gods) and some multi-faceted upstarts (The Three rather than The Seven) and a fervent form of unrelenting monotheism (here focused on Devara, the Goddess of Light rather than on the Lord of Light). As with George R.R. Martin’s series, these three prominent religions only scratch the surface of what people believe in the wondrous, broken place you’re exploring.

The whole game feels like that, suffused with the best bits of its influences without ever losing itself in their long shadows. Salt and Sanctuary is one of those unmistakable labors of love that can’t help but charm and entrance an attentive player. If the Souls games and their increasingly numerous indie ilk were never your thing, but if you love Ninja Gaiden or Castlevania or its Metroidvania variants, then this might be your way in.

And if you’re a Dark Souls devotee through and through, then frankly: There’s still a solid month before Dark Souls III comes out in the West. For me, and I suspect for quite a few others, that’ll be a month dedicated to making disastrous mistakes—and living with the consequences, and then recovering joyously—in Salt and Sanctuary.