Zac Burns of Ludeme Games joins me to discuss his studio’s digital adaptation of Chess 2, which is out on OUYA, and as of today, on Steam as well. Along the way, we talk about the challenges of translating tabletop games into videogames, the (many) problems with modern intellectual property and copyright law, and why the OUYA has been and remains such a welcoming space for first-time independent game developers.

That, and why free-to-play is not, in and of itself, the devil. 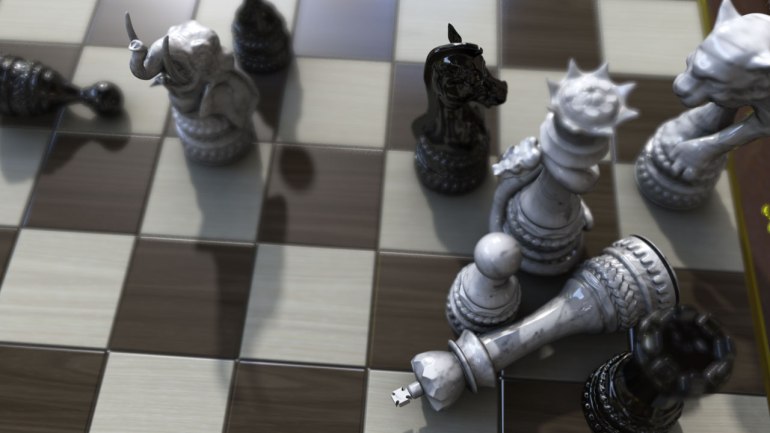 Chess 2: The Sequel is just what it purports to be, namely a sequel to Chess. Not just a variant of Chess, mind you, but an attempt at an iterative sequel that builds on the original game’s much-lauded merits (deep, chance-free, intellectually demanding one-one-one confrontation) while eliminating or mitigating its key deficiency (an emphasis on strategic stasis and rote memorization).

Chess doesn’t have an author as such. Chess 2 does. Which raises all manner of odd questions about ownership, tradition, culture, subculture, and yes, sequels.

• Here are the rules of Chess 2. You can download them for free, or kick in a $5 “tip” if you so choose—and as Zac says, you can try the game out with nothing more exotic than a regular old Chess set and some loose change.

• As Zac says, we recorded this interview on Independence Day. Yay America.

• WordPress was indeed hiding some of the older episodes from iTunes, Stitcher, Podbay, and so on. That should be fixed now, and you can always see our whole back catalog of podcasty delights right here on ye olde blog.

“All The People Say” by Carpe Demon.
“General Lavine” from Preludes, Book 2, by Claude Debussy.
“I’m in the Mood for Love” by Vera Lynn with The Casini Club Orchestra.
Nocture in D Flat Major, Op. 27, No. 2, by Frédéric Chopin.

Both piano pieces were performed by Paul Pitman, and the recordings are available for free on Musopen.